Moving averages are one of the easiest indicators to learn and understand . However their correct use is often neglected due to not comprehending the fact of sustained rhythms, phases and cycles in the markets. One cannot apply a certain moving average all the time, for that will be denying the existence of the various forces (which we will discuss in the master class) within the markets.

Anything simple as it may be, if it is widely used , it becomes an excellent tool in the hands of a knowledgeable trader. It has been noticed time and again that the markets react to the 50 day and 200 day period(notice I have not used the word ‘day’ here and mentioned period only) This phenomenon  will further become clear as we move on to the trading and the master class.

Moving averages also are the building blocks for one of the important indicators like MACD , Rsi etc.

Moving averages can be simple or weighted.

Most moving averages are based on the closing prices and are simply the average price of a security over a specific number of periods. For example a simple 5 day moving average is the recurring average of the last 5 periods.

Now the question arises as to which moving average to use at what time. The most popular moving averages are the 20 day, 50 day and the 200 day moving averages. Will touch upon how to trade using indicators only  at a later stage.

HOW TO USE THE MOVING AVERAGES

It is very important to understand that moving average used in isolation can prove to be counterproductive. A stock can move AROUND the particular moving average line multiple times giving whipsaws(losing money on every small rise and fall).

Therefore a moving average must be used only n conjunction with other forms of technical analysis.

Below is an example of the 50 and the 200 day moving average for the nifty index. on a daily chart. 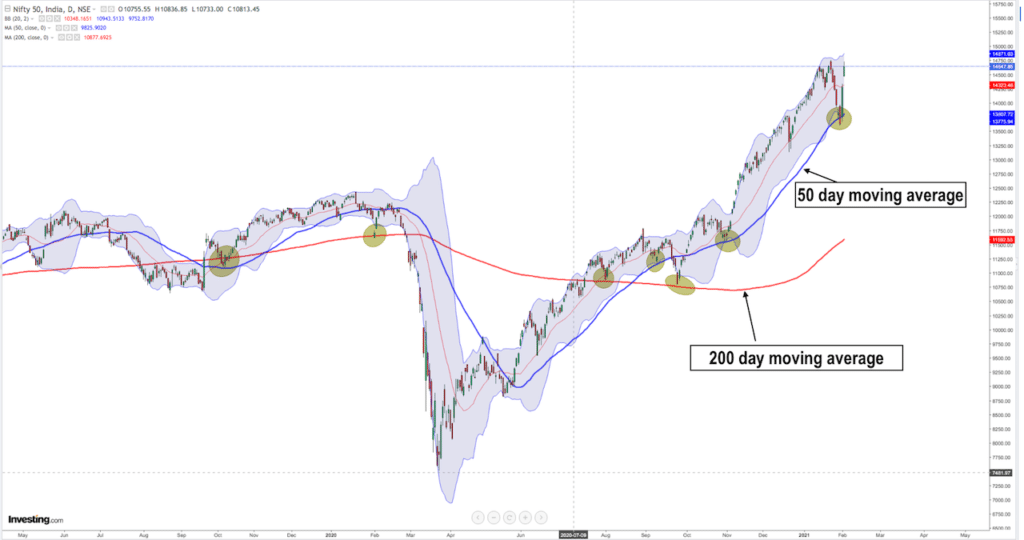 I have marked the supports or touch points where the nifty rose from the 50 day  or the 200 day moving average.

Similarly one can use the 9 day or the 20 day moving average also.

THE 50 DAY AND THE 200 PERIOD  MOVING AVERAGE WORK WELL IN ALL PERIODS.

Above is a very important point for consideration. Notice I have used the word period and not the day in fron to 50 and 200. 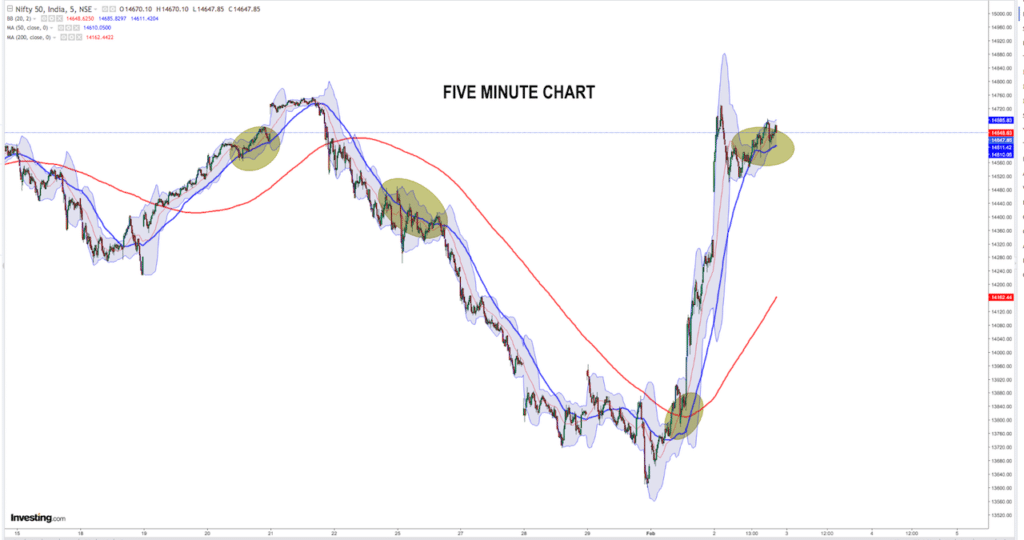 In the 5 minute chart you have the 50 period (blue) and the 200 period (red) moving average. The points of support and resistance are highlighted on the chart.

So the question will arise which moving average to use . The answer is ‘it is not fixed but is a variable depending on the stock and its volatility. This will be shown by live examples in later classes.

To find the supports and resistance in the NIFTY chart on the 50 and 200 period at different time frames.

This stands for ‘Relative Strength Index. ‘ It is one of the very widely used indicator specially for overbought and oversold conditions.

RSI was invented/developed by J.Welles Wilder. This is a momentum oscillator. It measures the speed and change of price action. RSI will always fluctuate between 0 and 100. According to the standard form, RSI is considered overbought when above 70 and oversold when below 30. RSI can be seen in different time frames.

Key factor of RSI is divergence which can AT TIMES give a warning about the impending fall. However it must be noted that RSI can be overbought and show divergence over a long period without affecting the markets. So it signals can be taken as warning signs rather than absolute condition.

Nowadays , with the advent of computers and software, calculation is done automatically and you have a ready made oscillator , which you can observe with a flick of the keyboard. However giving below the calculations for academic interest and a deeper understanding of the concept.

Following are the key steps in calculation of RSI

This takes place when there is a rise or fall in price which is not followed up by the rise or fall  in RSI in the same proportion. example of same is given below in the chart of SBI 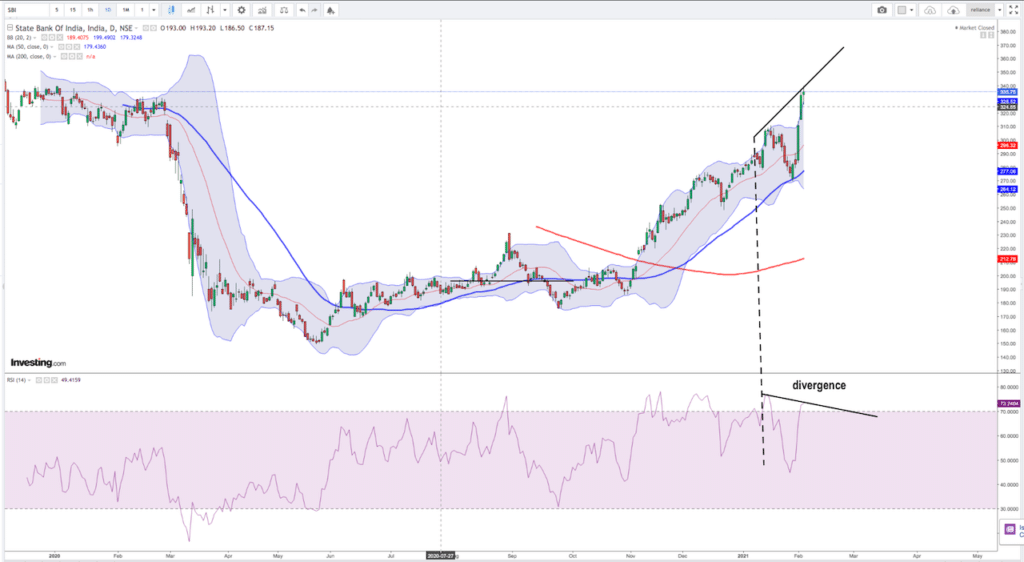 Mark all divergences on the charts of SBI , Tata Motors and Reliance

When RSI crosses above 70 it is said to be overbought and below 70 oversold.

This is evident from the chart of SBI below. 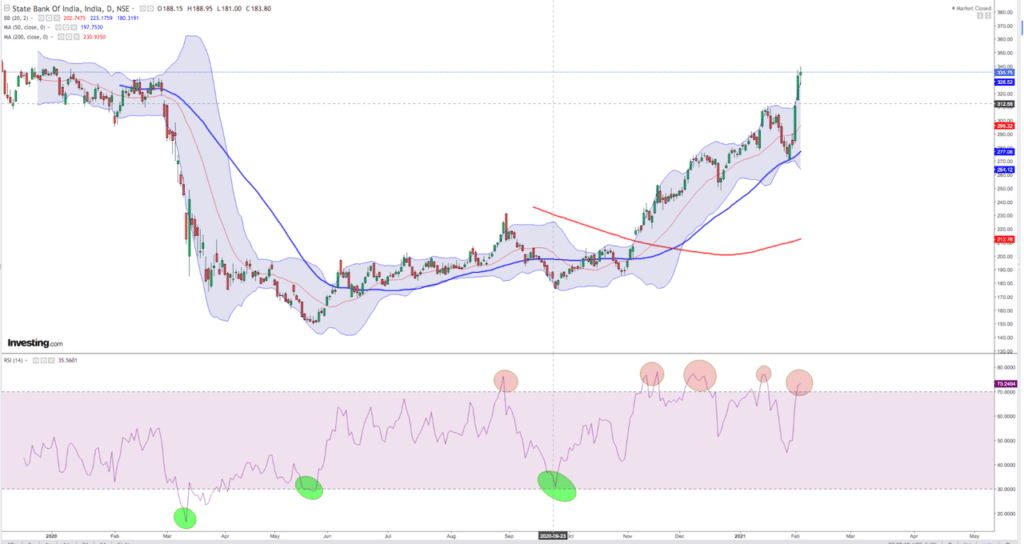 Mark all overbought and oversold points on the charts of SBI. Tata Motors and Reliance on daily and weekly charts.

The stochastic oscillator shows the present price in context of the extreme ranges of price over a given time. The time period by default is 14 days. It is expressed in percentage and calculated as follows

This is never used in isolation but used along with RSI and MACD. More about this at the end of the chapter.

The accepted range is usually 14 days. We will calculate %K by using the information on the stock of Apple in the month of April-May 17.

Thus, the table would be as follows, 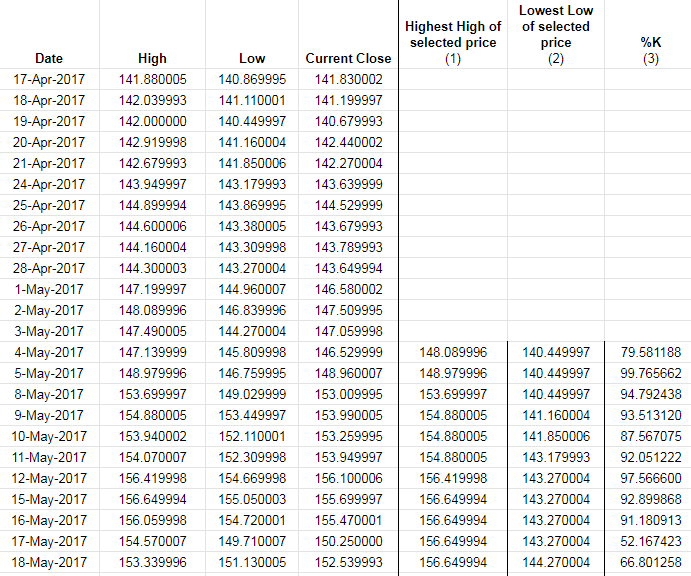 Similarly, we fill in the rest of the fields as well.

Thus, the table will be updated as follows, 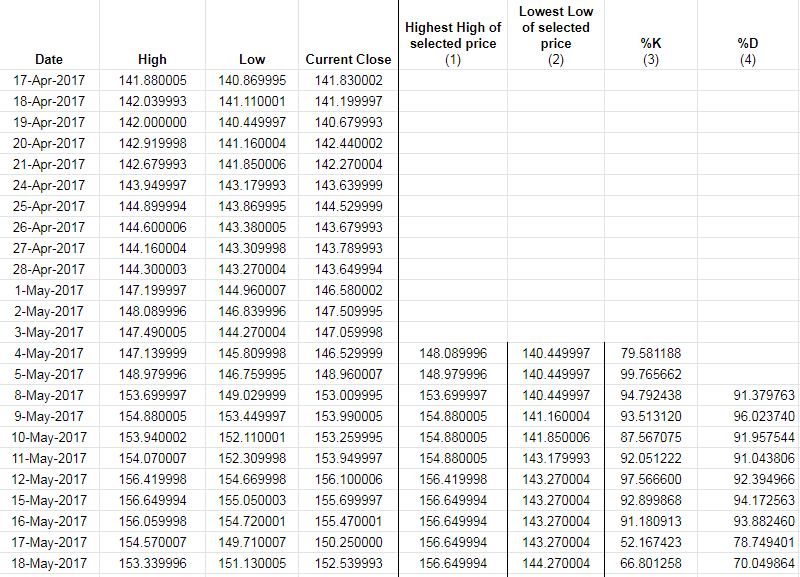