Out of all the forms of technical analysis, elliot wave analysis is the least understood. Also its limitations sometimes go unnoticed. Before we start on the understanding of the concept following points must be noted and kept in mind

If you have a clear strategy for trading , specially momentum stocks , this can be the greatest tool.

Like all cult and dogmas, it is very easy to become a fanatic elliot wave theorist. Although you can use elliot theory as the key methodology for analysing the markets and any individual stock, it should be always kept in mind that this theory was based on herd mentality WITHOUT softwares and algorithms. Nowadays many institutions are using computer generated buy and sell orders. This PROBABLY results in some form of variance from the herd sentiment.

However it is only when you combine the elliot theory along with the other traditional methods , that you start getting into the real rhythms of the markets which can include the ‘grey market forces . This will be discussed in detail in the trading and the master class.

Fractals are mathematical structures, which on an ever-smaller scale infinitely repeat themselves. Elliott discovered stock index price patterns were structured in the same way.

Elliot discovered that all herd mentality(which is to be found in a stock market subscribed by millions of people) follow definitive structures and rules. These structures can be likened to waves which are not only repetitive but are also based on fractals OR as each wave have , when zoomed into , components which are exactly the same as their larger parental waves. This forms the essence of the elliot wave theory which , as we go along will become clearer.

Now for the classical wave theory

In the elliot wave theory there are two types of waves , impulsive and corrective. Impulsive wave are 5 waves and corrective have a three wave structure.Both type of  waves occur one after the other as shown below 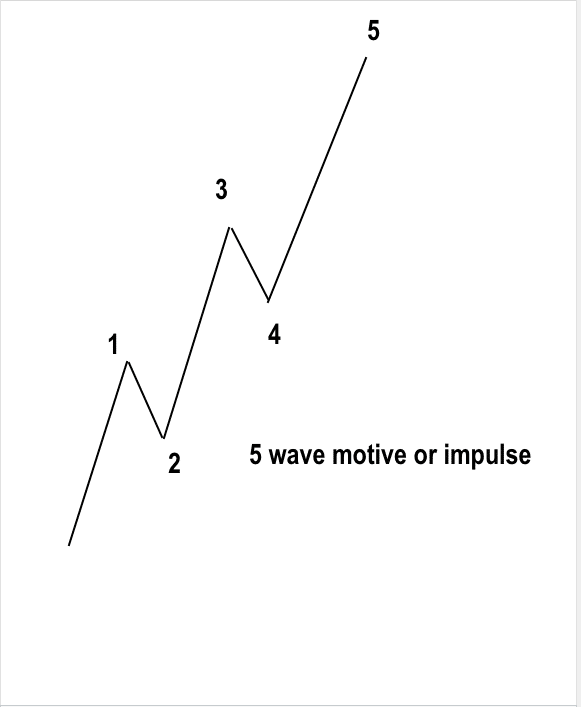 As can be seen above , wave 2 and 4 correct the waves 1 and wave 3 respectively.

waves 2 and 4 are corrective waves and ‘correct the upward moving waves 1 , 3 and 5. 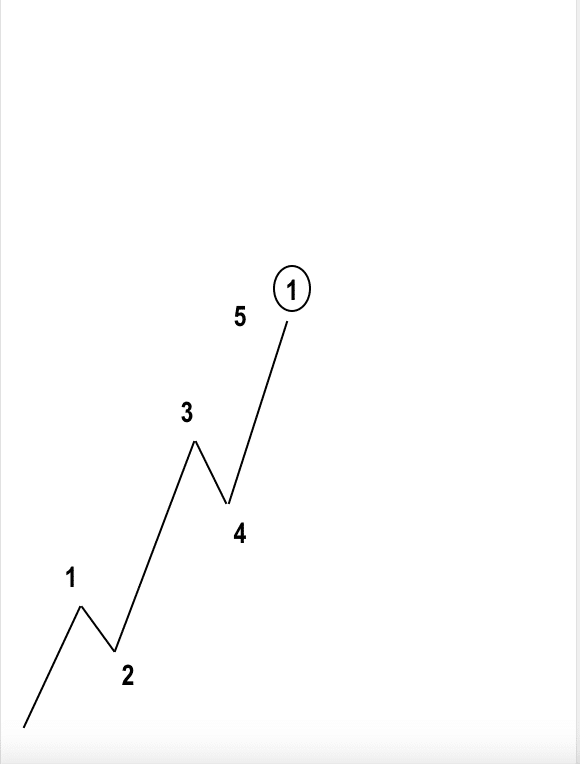 This LARGER wave will now correct in 3 waves A, B and C as shown below 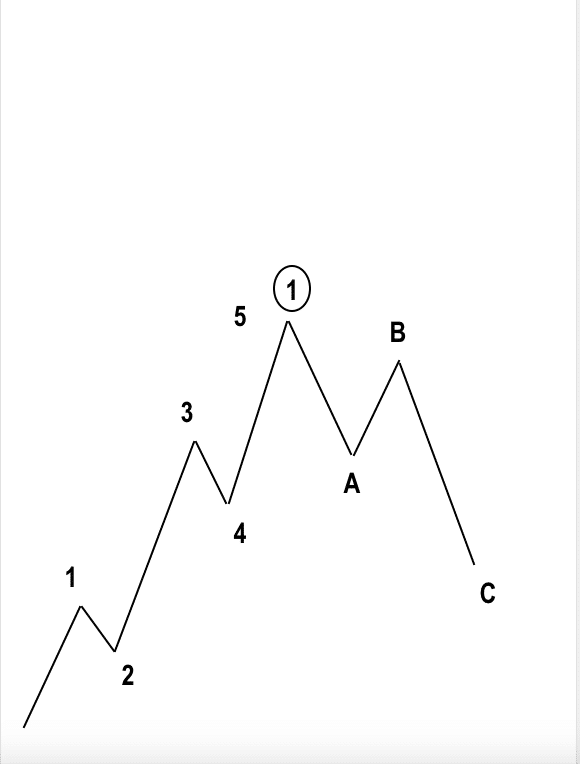 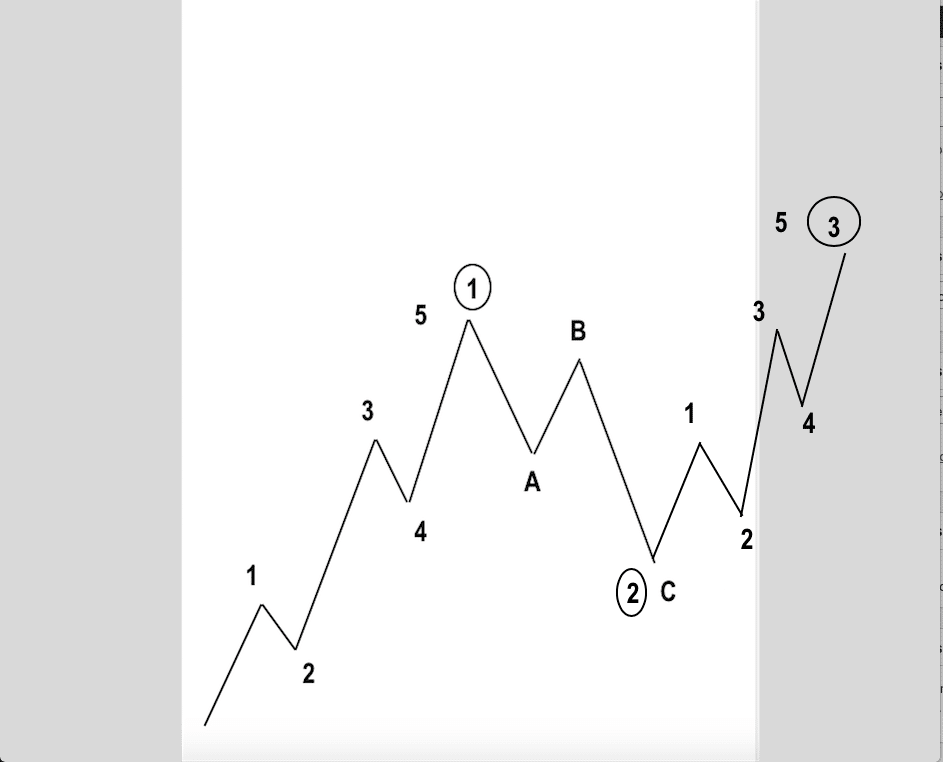 Now from the encircled wave 3 we have another wave 4 (encircled ) down and then the final wave 5 . This process is repetitive and is shown below 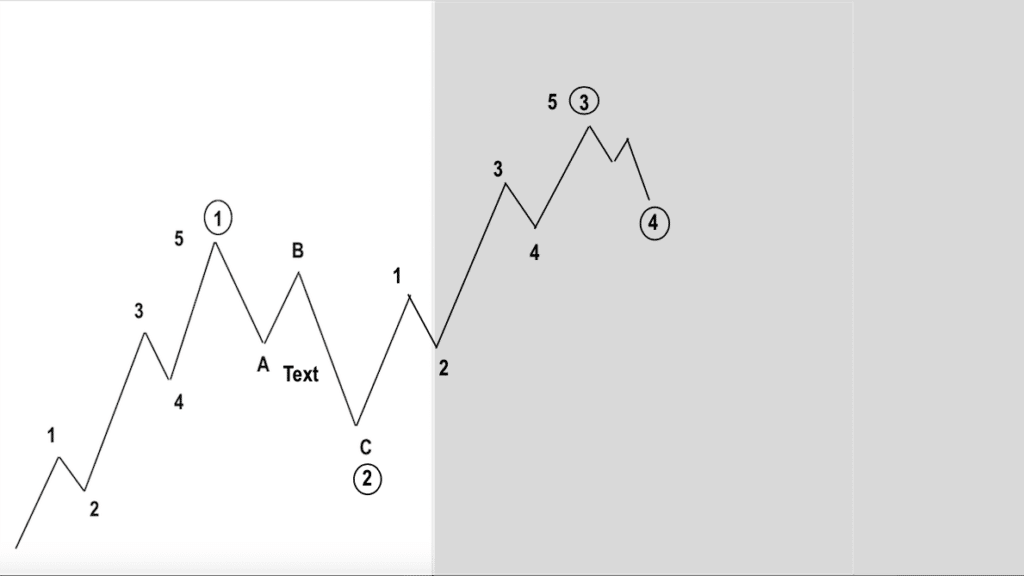 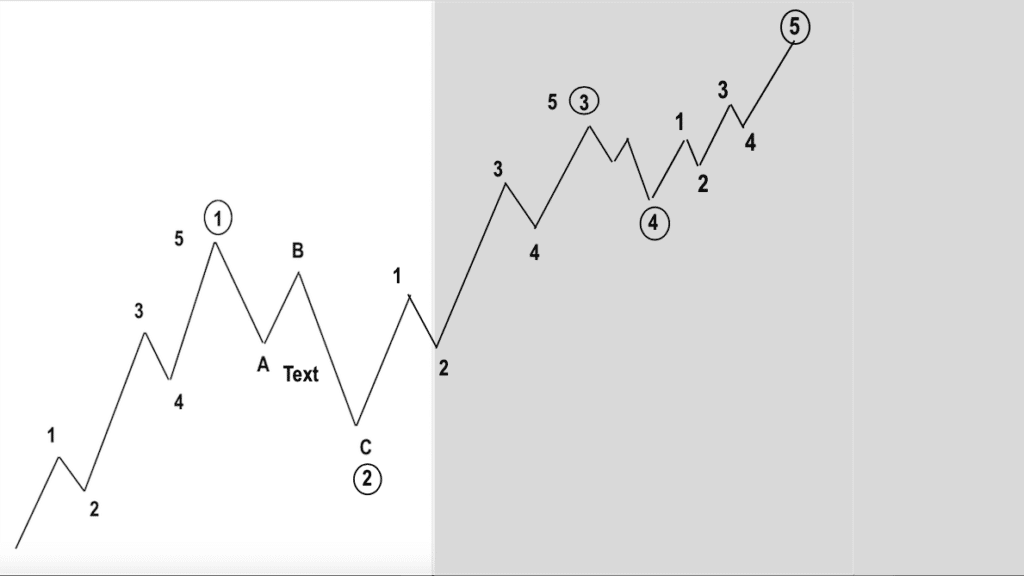 The encircled wave 5 will now correct the whole structure from the commencement.

These can replace the 5th wave and at times the 1st wave. In a diagonal the 4th wave always comes into the territory of wave 1.

Below diagram will make it more clear 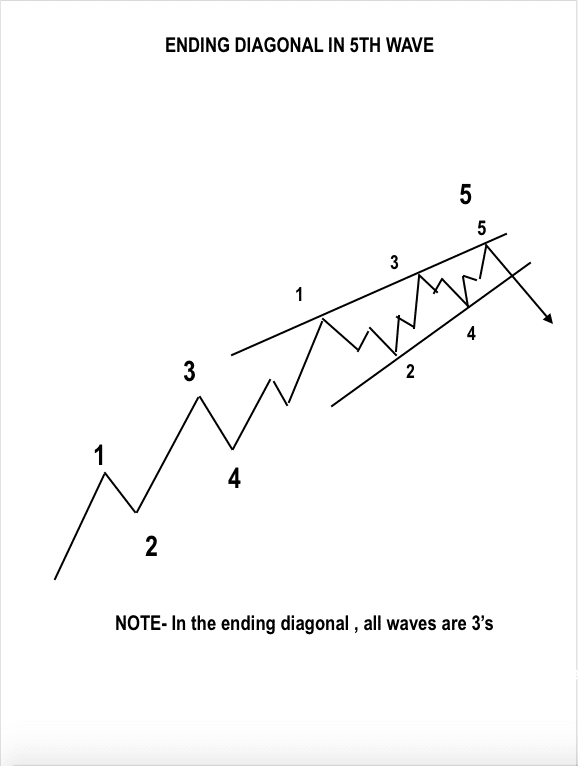 It is also of importance to note that the corrective waves follow the following pattern.

Wave A and wave C are both impulsive or motive waves but in downward direction and wave B is a 3 wave structure pointing upwards..

Elliot named nine degrees of waves , from the smallest visible ON AN HOURLY CHART.

For sake of recognition , as per the classical elliot wave theory following degrees were named from the largest to the smallest or

Although we have shown only the zigzag correction above (ABC) we can divide the type of corrections in three main categories, namely Zigzag, Flat and triangles

This is a typical ABC correction as shown below 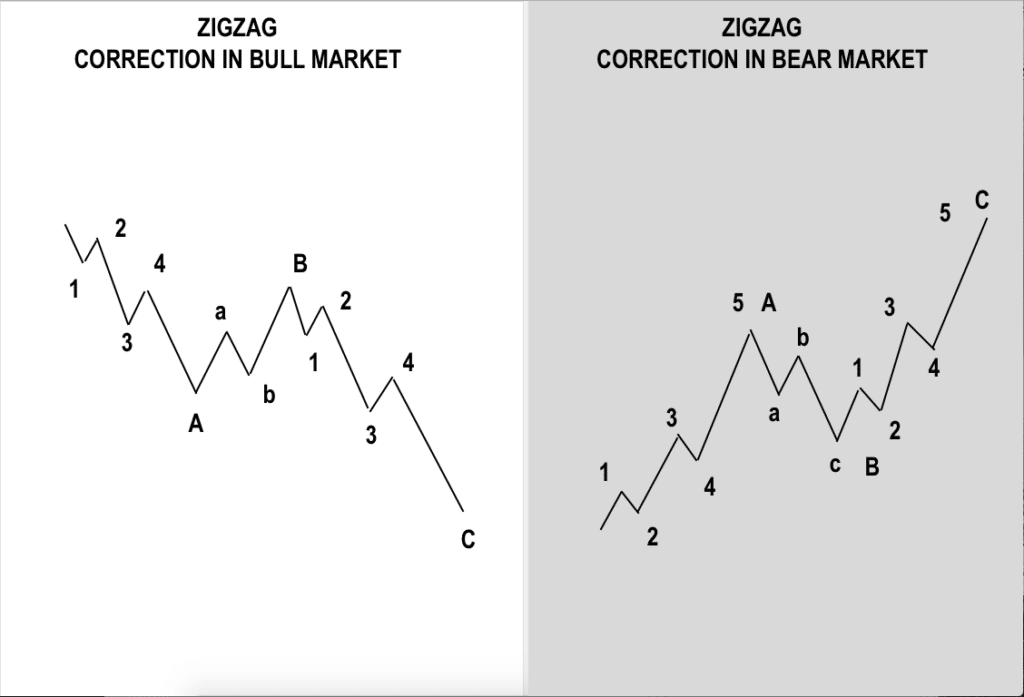 This type of ZIGZAG includes an intervening ‘3’ as shown below

This differs from the ZIGZAG in this way that the wave A here is a three wave structure instead of 5 waves. Also the wave B goes to the level of starting point of wave A.  This is of three types namely regular, expanded and running. We will discuss this one by one. 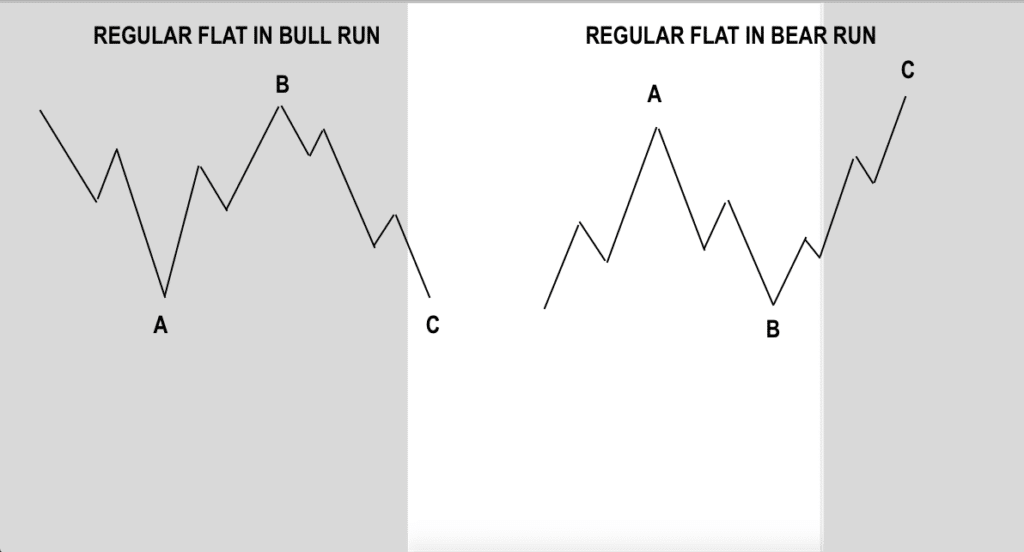 In expanded flats , wave B finishes beyond the starting point of wave A and C finishes well beyond the end of wave A. 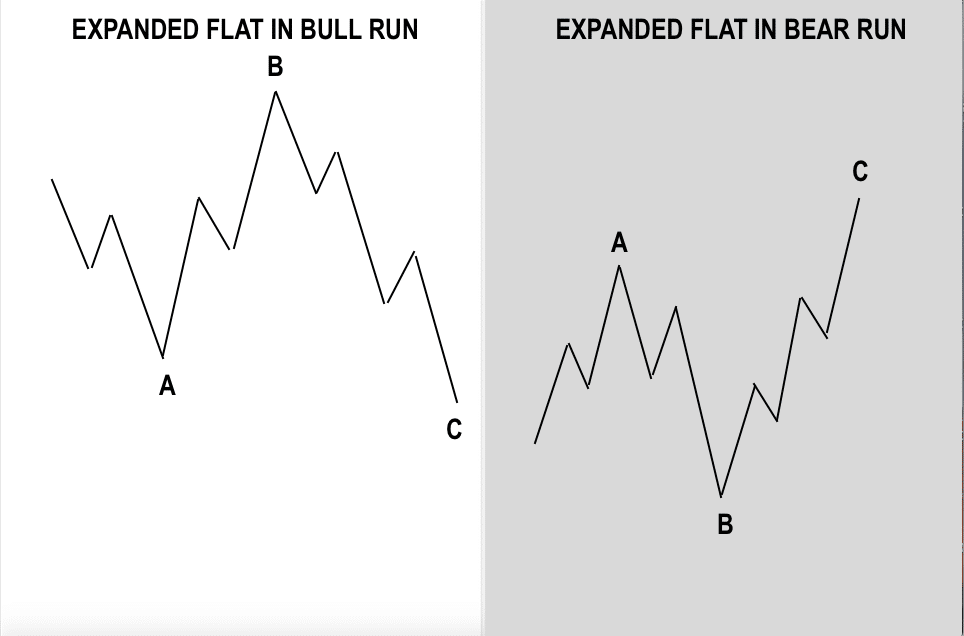 This is a half finished expanded flat. Here wave C finishes short of the start of wave A. 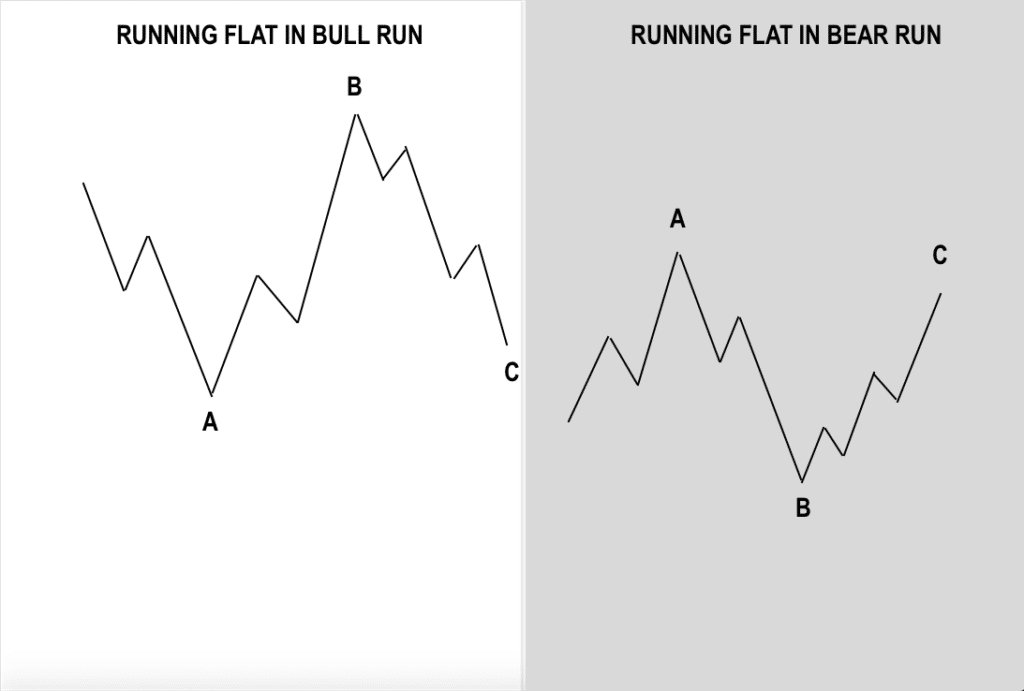 Mostly the triangles are 5 waves but sometimes can occur in 9 waves where the last wave e extends. 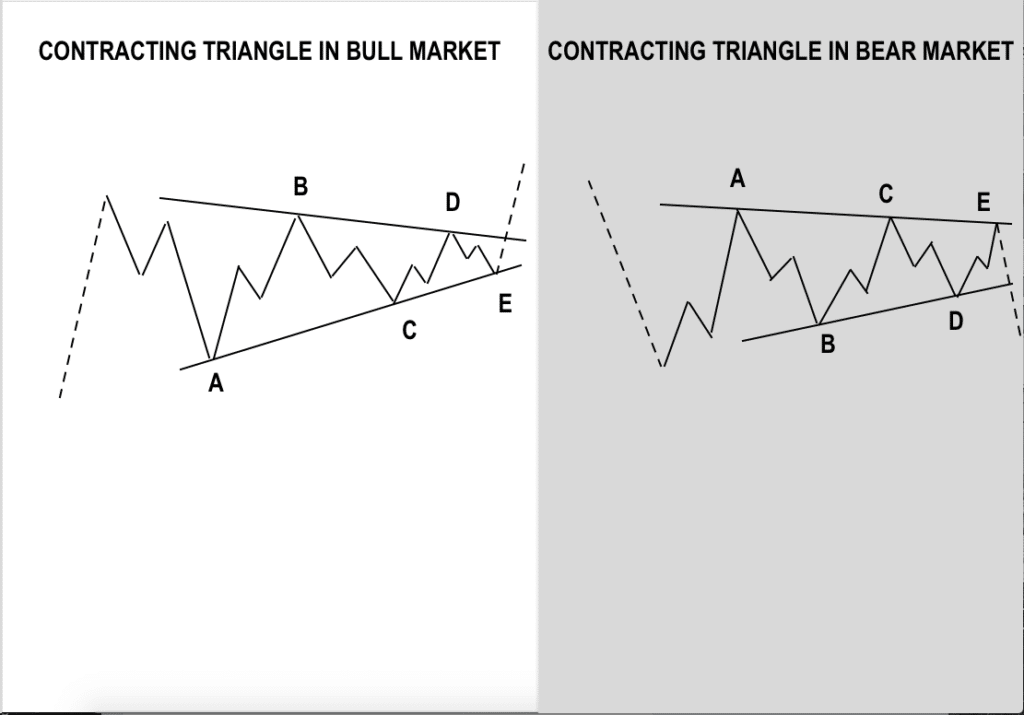 This is 5 waves and contracting as a triangle. The last wave E at times may overshoot the boundary line. 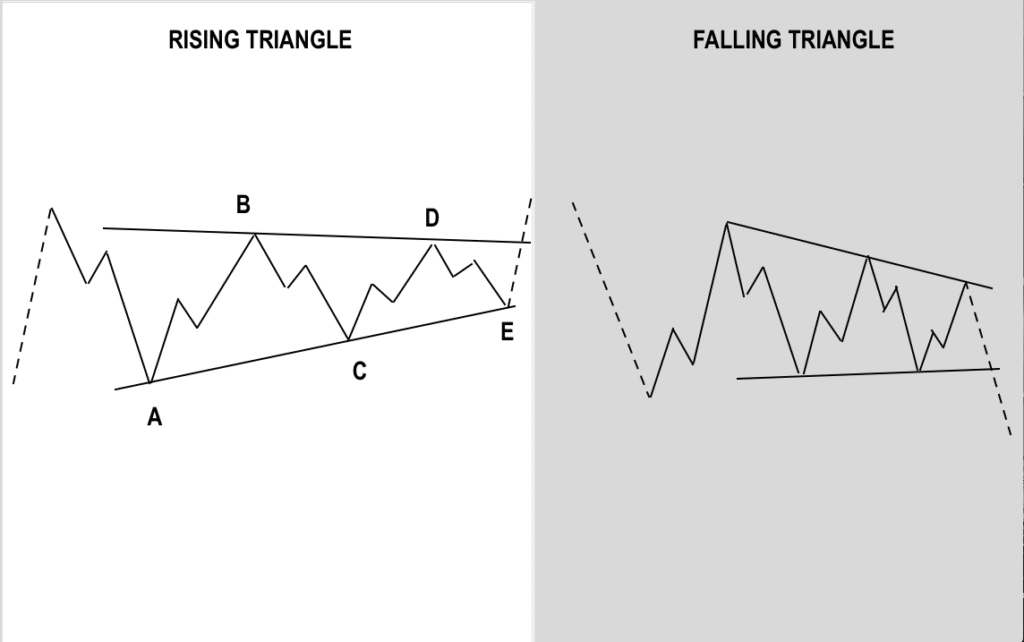 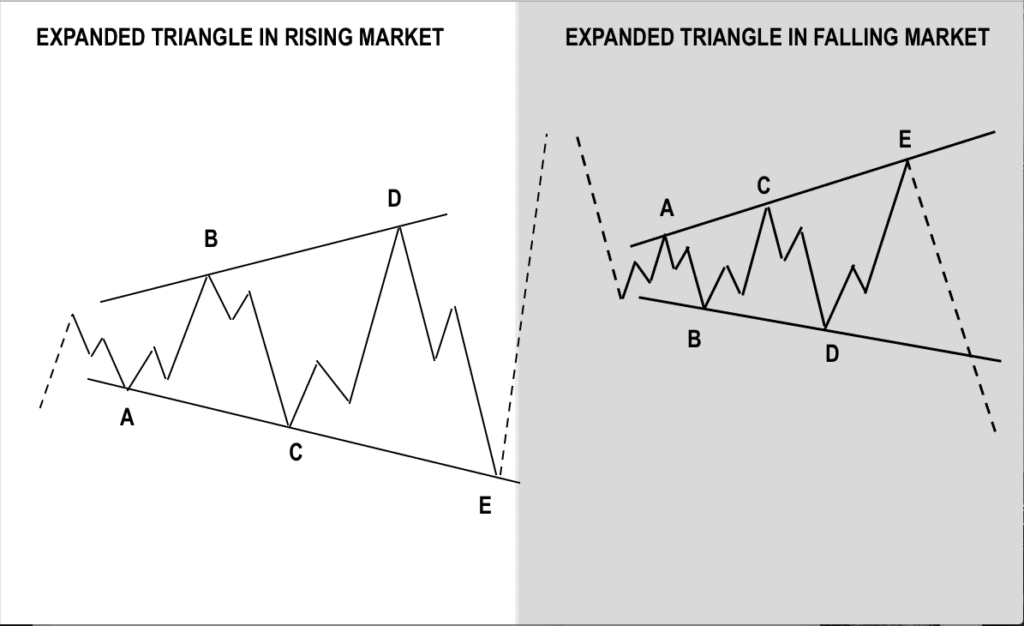 Below giving all together as a recap

GUIDELINES AND RULES  FOR ENDING DIAGONAL

GUIDELINES AND RULES FOR IMPULSE WAVE

RULES AND GUIDELINES FOR ZIGZAG

RULES AND GUIDELINES FOR FLAT CORRECTION 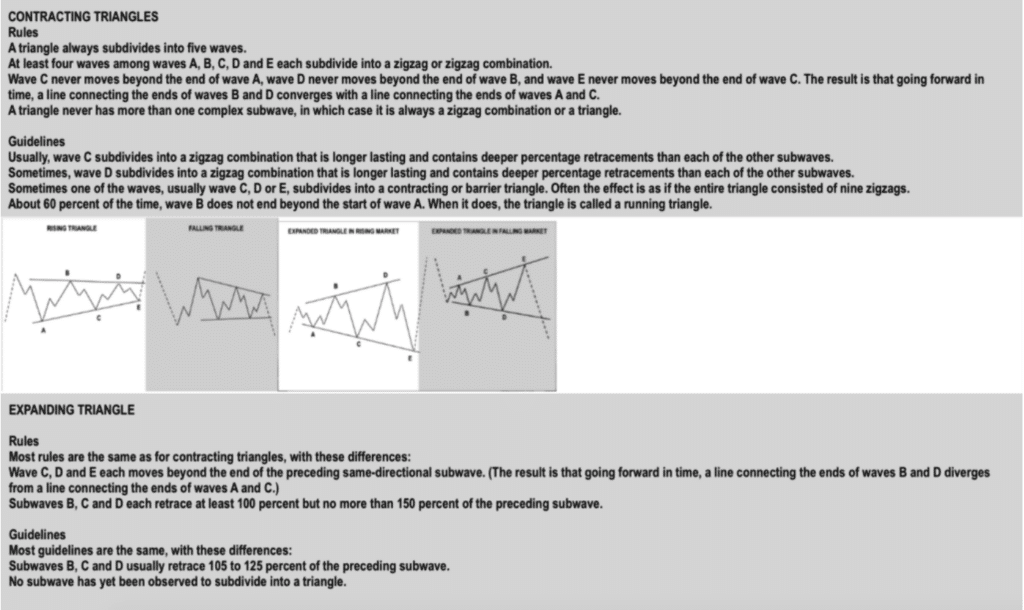 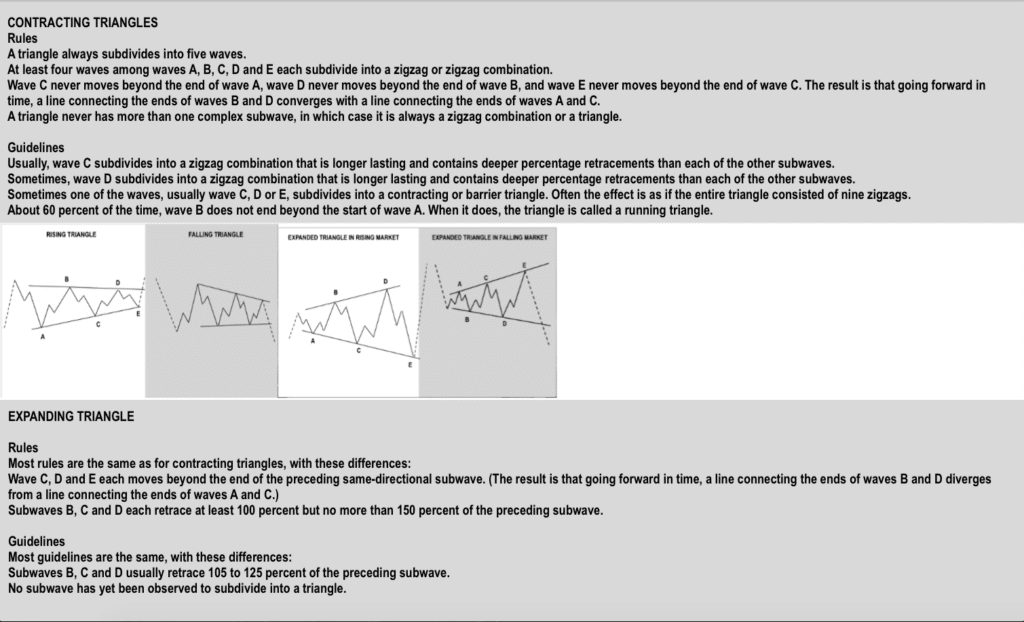 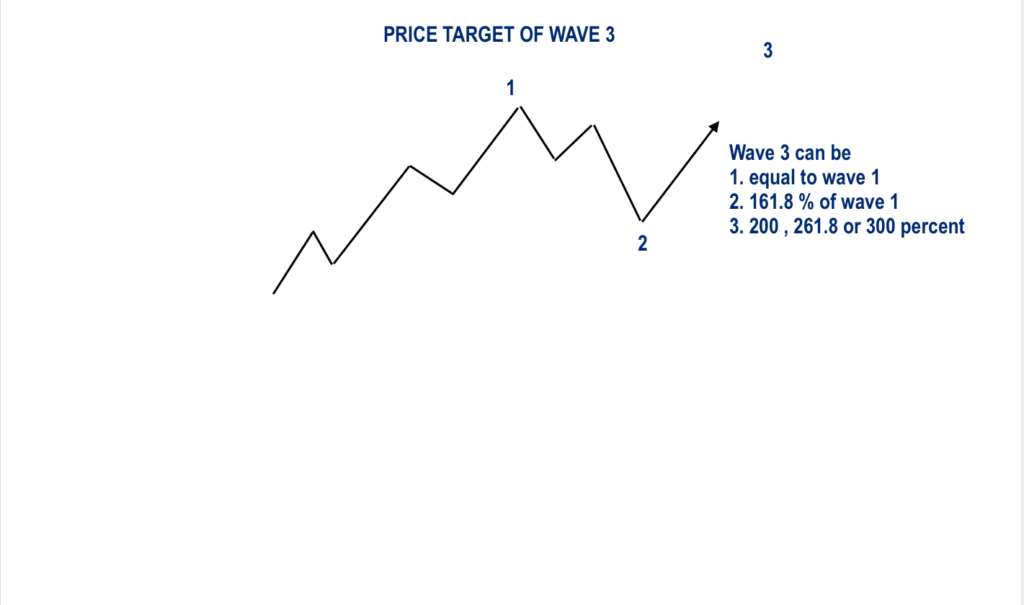 Wave 4 quite often ends in a flat or a combination of zigzag and flat.

Wave 4 can also be measured off in a channel drawn with the top boundary of the channel going through 1 and 3 and the lower one a parallel line thru the same. 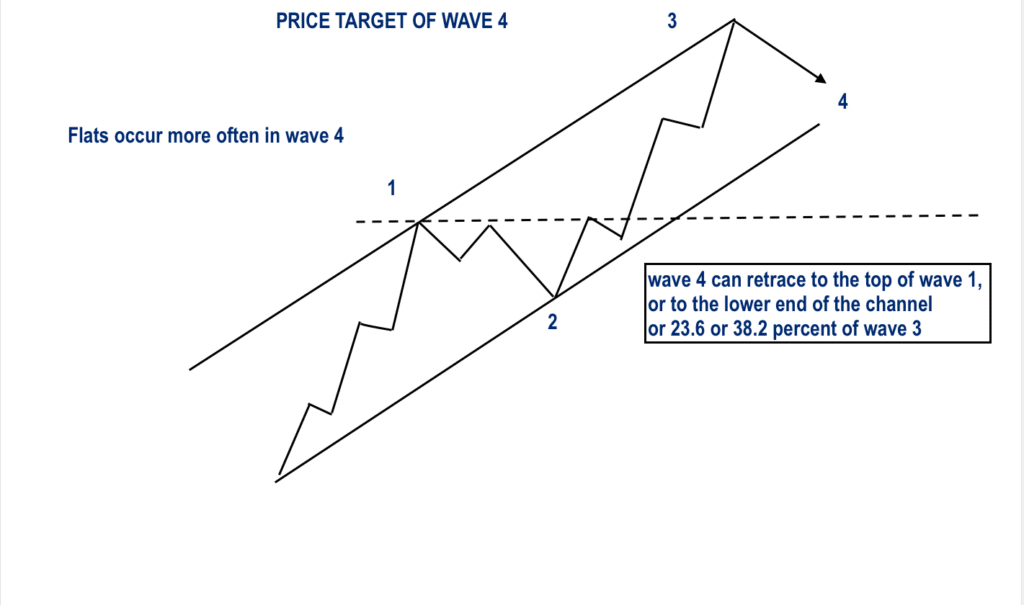 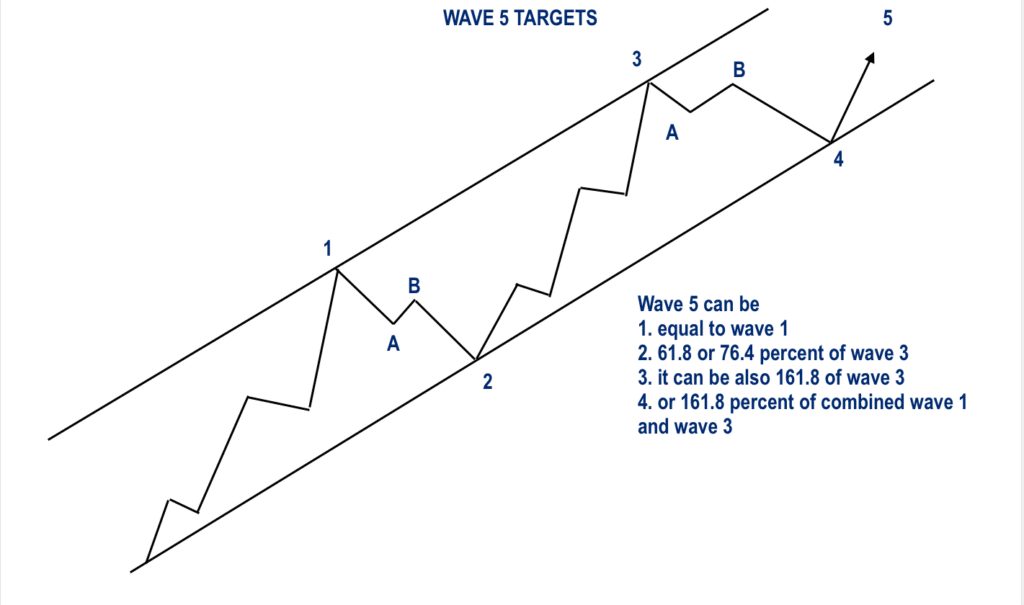 Draw a parallel line through wave 3 OR wave 1.
Ideally draw two parallel lines through 1 and 3. Thus you will have two targets for wave 5.

PRICE TARGETS OF WAVE A , B AND C 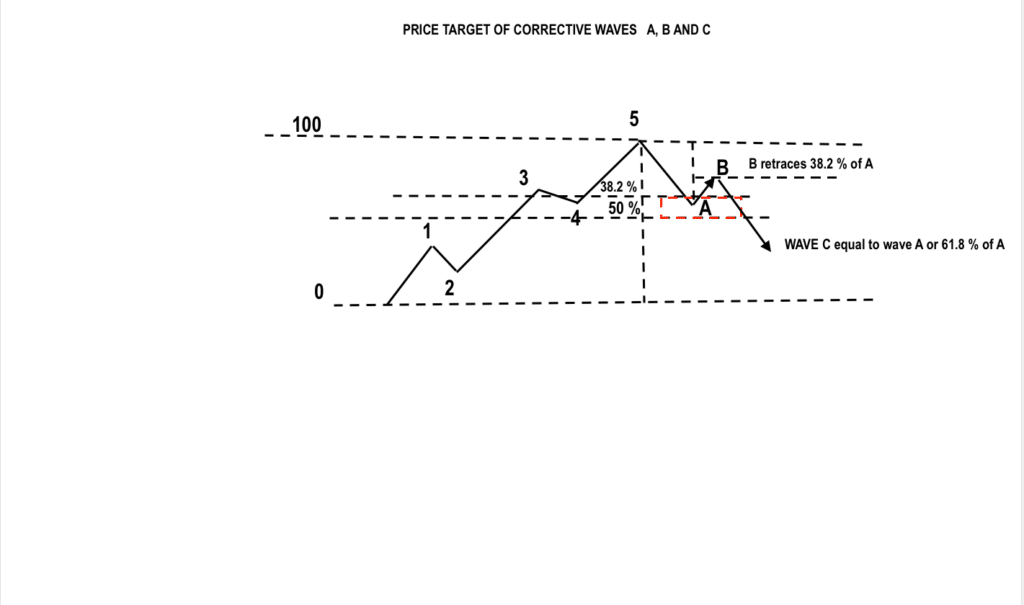 Price Target for Wave A

Price Target for Wave B

Wave A  in a zig zag correction retrace 38.2 and 50 percent of the previous 5 wave

Wave B in a zigzag correction mostly retraces 38.2% of wave A.