Date
May 17, 2021 Posted By
Masswaveindia
Categories

Had humongous number of subscribers requesting for analysis of the Nifty heavy weights along with nifty. Though this is being given to paid subscribers  already, this time putting same on the open forum also.

The Nifty heavyweight will give an idea ss to the future course of action.
NIFTY 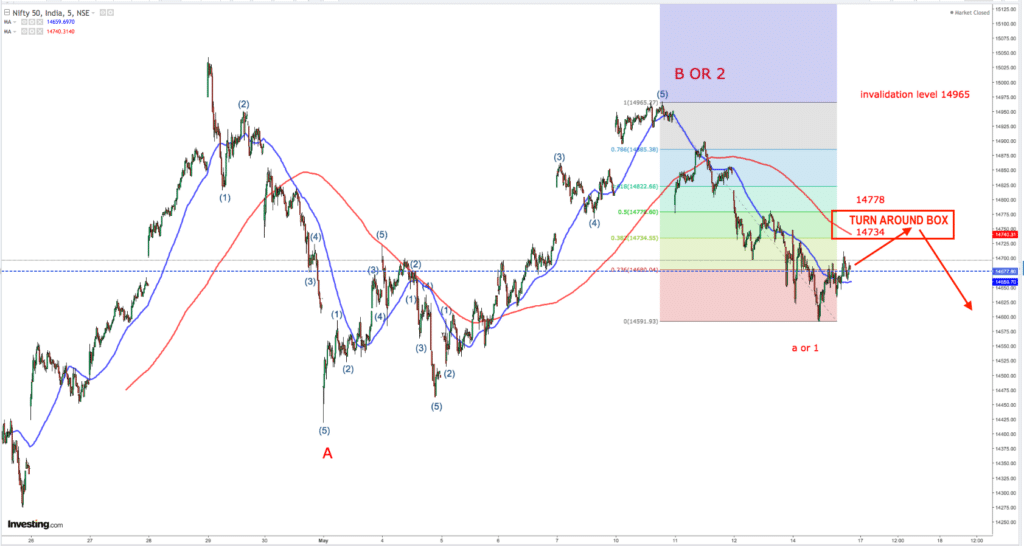 On monday we may see a pullback as shown above. However the larger trend is downwards only.

Reliance may rise intraday  or on an intermediate basis. However a good downside is still pending and we may see lower levels in the coming days. 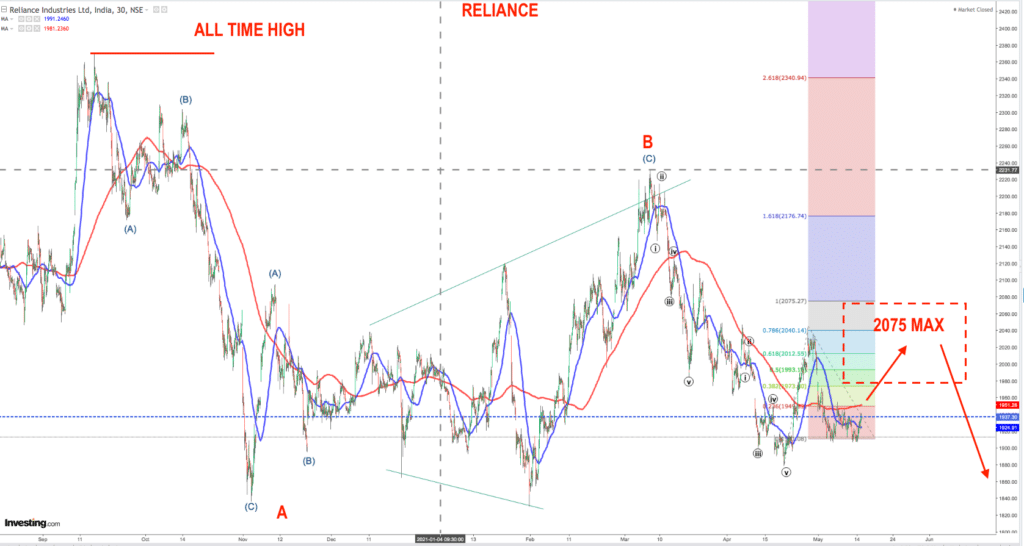 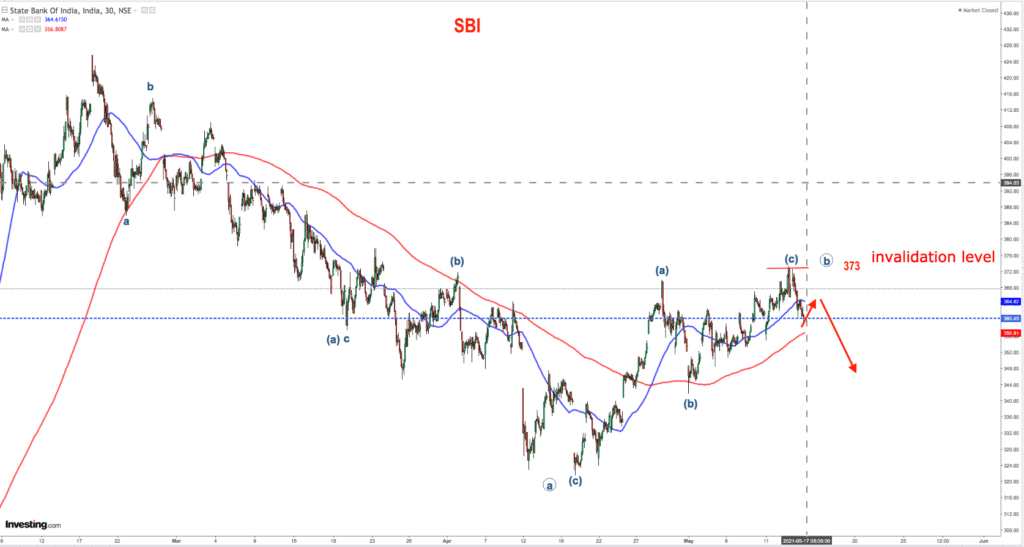 SBI CAN go up on intraday basis. However will not be able to sustain at higher levels and will come down at a very fast pace. However in case goes higher than 372, the pullback can be more but the larger bearish trend remains in force.
TATA MOTORS 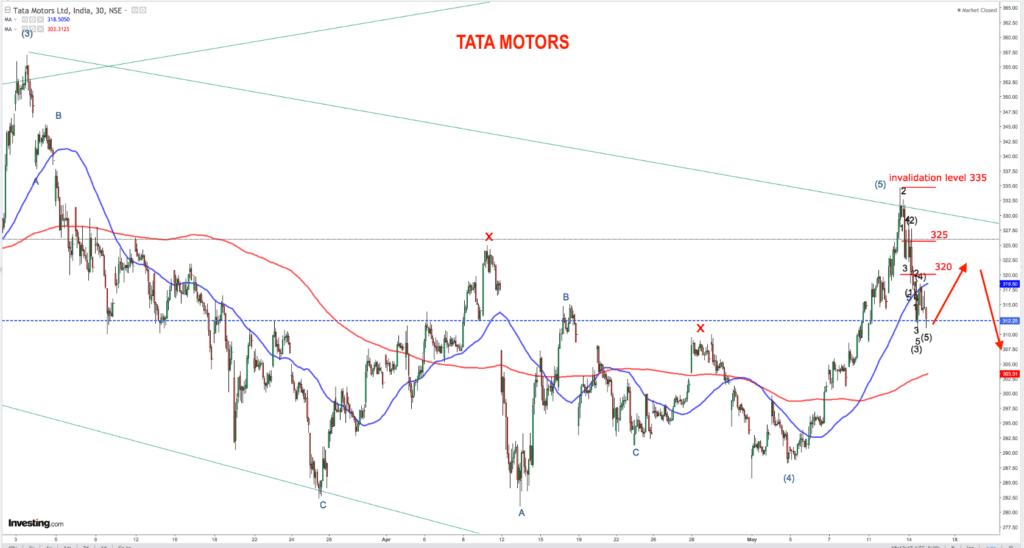 Tata motors is a volatile share. main trend down. However on monday can take a sizable jump as a pullback in a major downward trend. 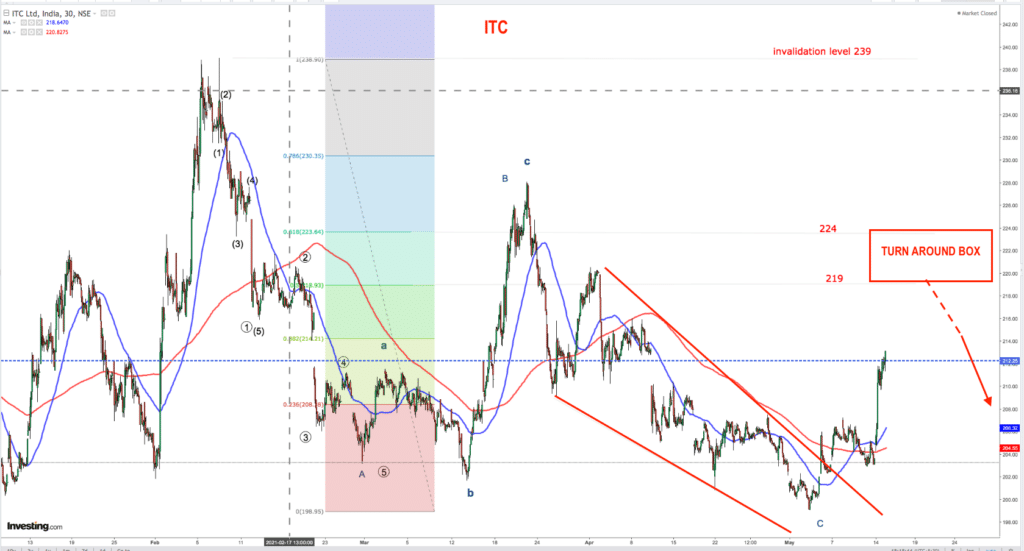 ITC MAJOR PULLBACK EXPECTED. CAN GO UP TO EVEN 219-224 RANGE. However major trend down. therefore caution required. 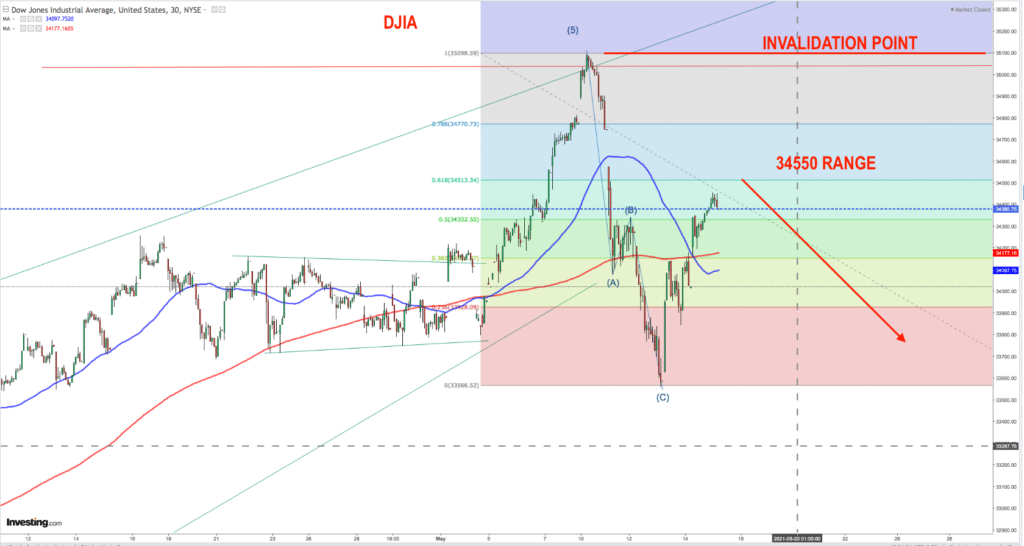 In our earlier post we had mentioned dowjones going up to 35000. It touched 35100 and started falling down
We have given a range of 34550 max on dow jones. However if it crosses the invalidation point of 35100 , (unlikely), we will need to do another wave count.
Dow jones is on a major downturn OR IN THE PROCESS of making a top. Sometimes top[s can take time though pricewise may not go anywhere. 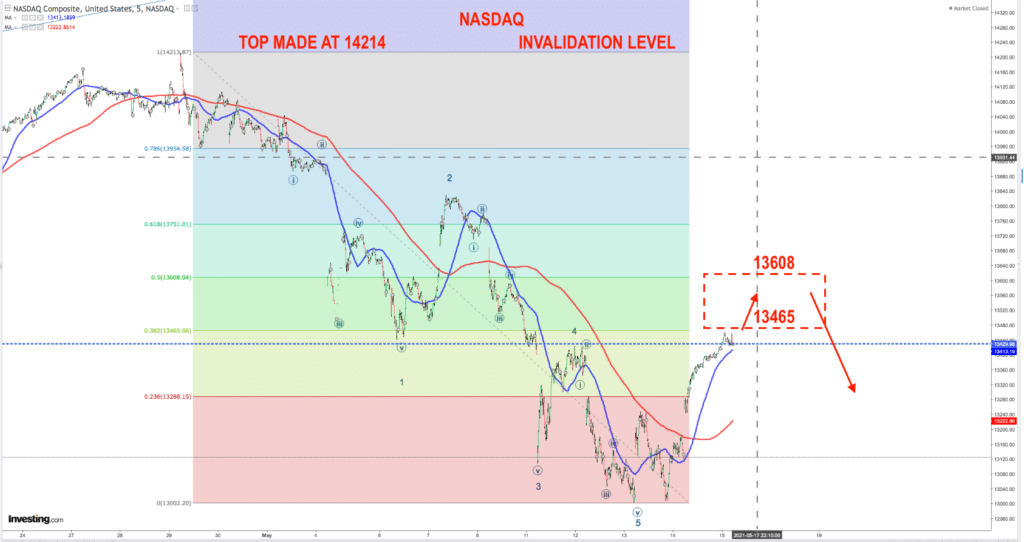 In our last post we had given nasdaq as having entered the bear run. This wave count can only be invalid if NASDAQ crosses the previous high and stays there for a day or two.(In which case a major bull run in Nasdaq can be expected!!!!!).
In my personal view above scenario very unlikely and we should look at the bearish count for now. 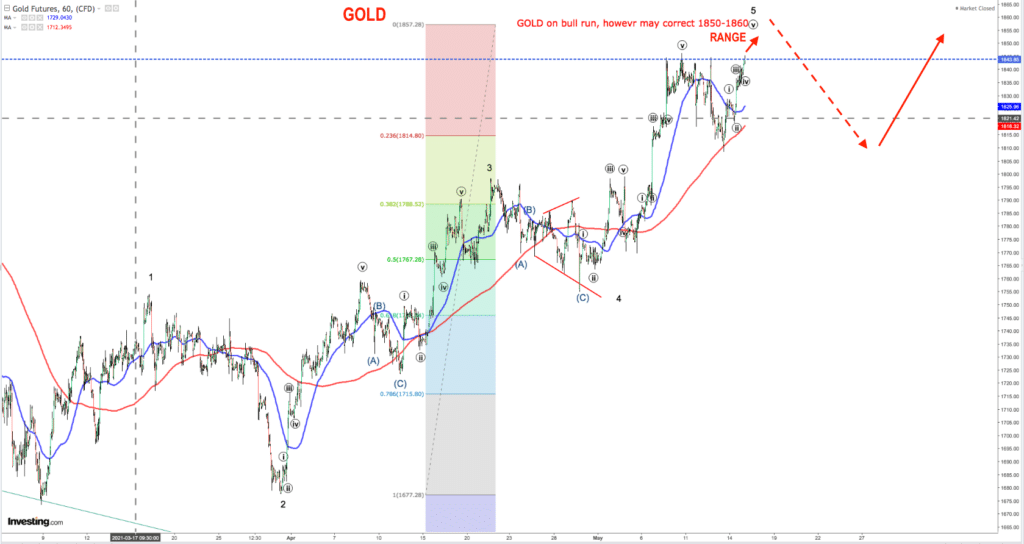 Gold on a bull run. However it may correct now in tandem with the temporary rise in usd index.
Once this correction gold is over(correction to around 1800 levels), the bull run should resume. 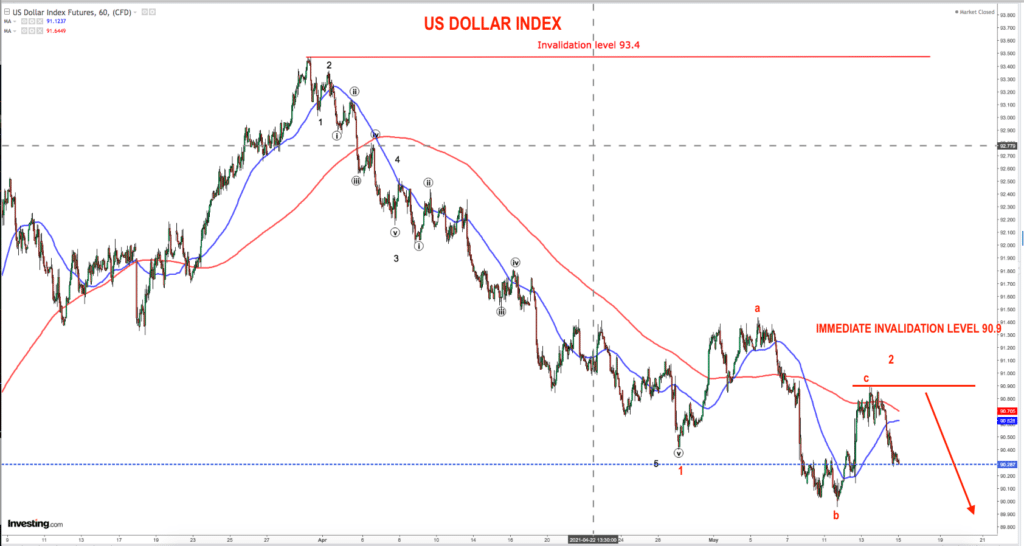 A massive fall can occur in the usd index. However can rise intraday on monday but the rise may not sustain. 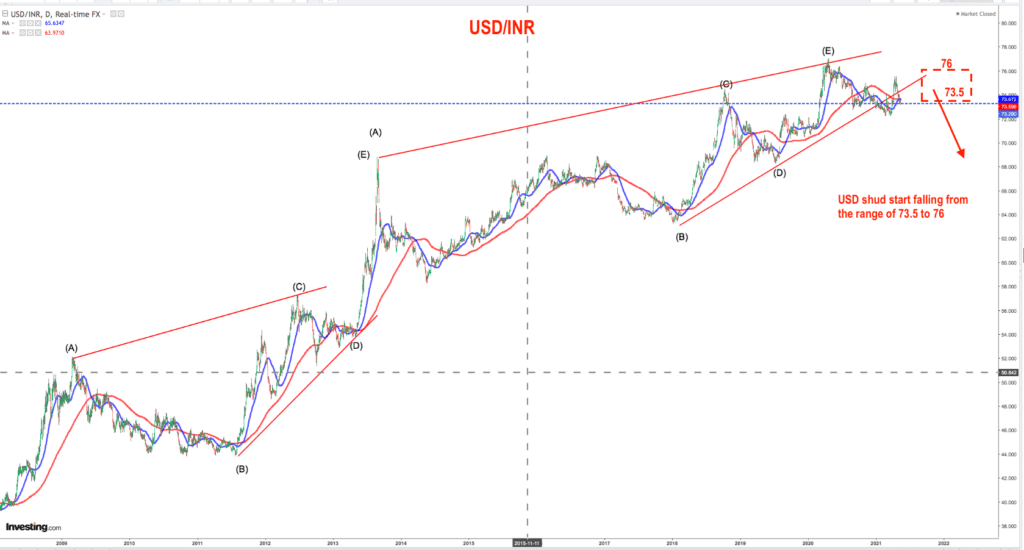 Can see the inr strengthening vis a vis usd. However can move side ways too for quite some time. 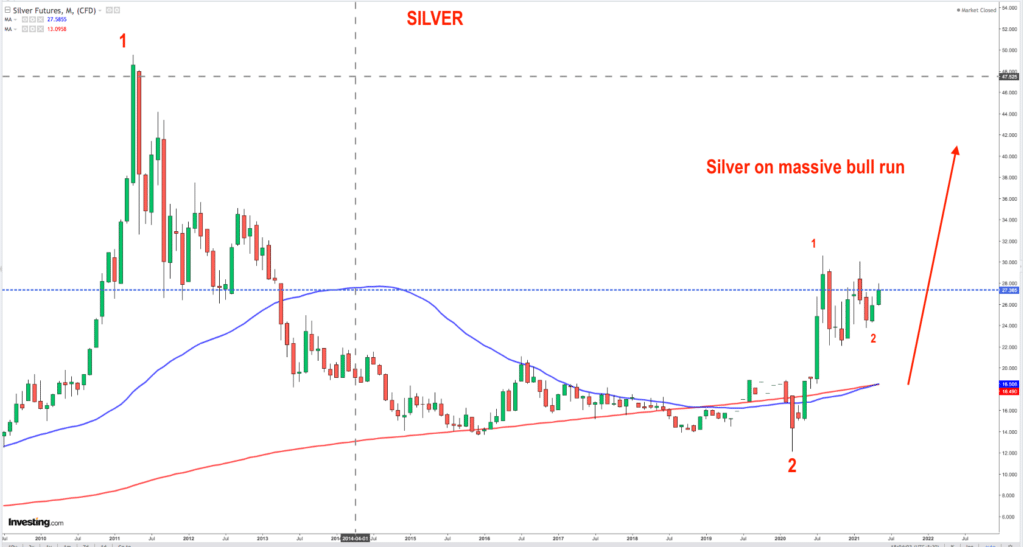 Silver on a massive bull run(much stronger than gold at the moment.)
See exponential rise in silver in the coming time.

Disclaimer- All analysis on this forum is purely academic and a study of the elliot wave analysis theory. This study should NOT be used for investing. For deployment of your money in the stock market , please consult the fundamentals of the company through a certified fundamental analyst.